Have you ever heard the like – the piano is accompanied by four percussionists, and the clarinet supplies the bass? At times, the unlikely combination brings us well-known musical pieces from Chick Korea, Shadowfax, Carla Bley or Debussy seen under a new light. At other times arrangements weave a mischievous dance around a tango from Secaattin Tanyerli or compositions from Egberto Gismonti and Jan Garbarek so that the original themes are barely discernible. And the group’s own compositions seamlessly join the variations and collages to complement the program.

ATPPG has formed almost accidentally: Shortly after 1995 disbanding of “Mozaik”, a jazz rock-oriented group that lived for 12 years and left a legacy of several younger groups following in its footsteps, three of the ex-Mozaikers accompanied Ayse Tütüncü for a single session in a café. One session led to another, and before the musicians were aware of it the unlikely constellation had solidified into a broader and enduring ensemble of piano, percussions, and bass clarinet.

Oriental instruments such as a Ramazan-drum (davul) and bendirs take their place in the assemblage as a matter of course, and there is no mistaking the unique Anatolian blend of the East’s rhythmic and harmonic wealth that naturally figures in the group’s sound. It is an inherently political sound, testifying to the group’s heritage and essential progressive stand without being ostentatious about it. Nevertheless, ATPPG effortlessly transposes this weighty background into a wide-reaching international cosmos, so that the interwoven percussion arrangements rise out of a sparkling instrument pool drawn from four continents: Kaxixi, Triangel, Bongo, finger cymbals, Castanettes, Mbira, Quica, Woodspoons, Rototom, Bendir, Ramazan Drum, acetate and tin sheets.

Whether it is a requiem-like ‘Hasta Siempre’ or children’s songs, a Kurdish dance or a Monteverdi opera, rumba, tango or samba rhythms, the group dips into a wealth of sources and comes up with a sound all its own – featuring colorful piano, bass clarinet, and vocal arrangements as well as the percussions – a sound, a concept which remains open to improvisations and to giving voice to different lands altogether.

Frequently a firework of percussions clears the air for impromptu solos or duets from the piano and the bass clarinet, easily flowing into another stretch of the freely structured interplay among the sextet – music that is as conceptually loaded as it is easy on the ear. 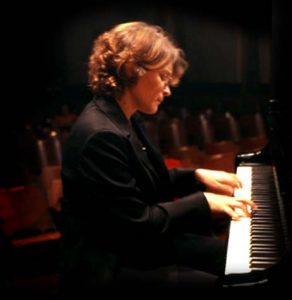